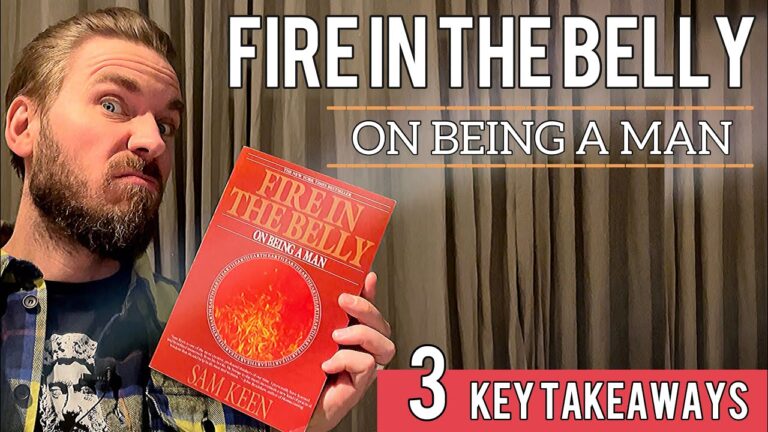 3 Key takeaways from Fire In The Belly: On Being a Man.

The book is meant to uncover a new route to authentic manhood. Sam Keen takes modern society’s often contradictory expectations of what it means to be a man and contrasts it with traditional cultures.

This book challenges an outdated definition of masculinity that leaves men impoverish and alienated, and tries to replace it with of purpose and fulfillment.

Video Review of Fire in the Belly: On Being A Man

3 ideas from the book.

The good and the bad news about the traditional rites of passage:

‍Traditionally you were a child, and then a man or a woman. This eliminated any time where freedom could develop. This was a great way to ensure conformity in the tribe. Carefree years of adolescence is a modern invention.

If I would rank key events that triggered spiritual growth for me, then being close to burnout would rank as nr.1.

“On the path to authentic self-hood we must remain for a time in the dark side of the soul until we reach the very bottom of despair.”

Philosophers and theologians and pilgrims talks about this part of the journey as being crucified, losing the ego, descending into hell, or battle dragons. Now we call it by clinical names like stress, depression, burnout.

Tricks like stress & time management, mindfulness techniques, and learning to cope w. stress, might actually destroy the significance these experiences of despair ones had on people’s lives—or at least delay the growth that needs to happen.

Companies are trying to turn the workplace into the new  home and hearth. I can relate to this a lot since I’m in the tech industry where this trend is quite intense. A Company “culture” is invented, with it’s own “myth and rituals” and we are expected to view the workplace as a “family”.

But “under those velvet gloves is the iron fist of warfare.”. I think I know what Sam means by that. I have seen what happens when striving companies hits a rut: No more bean bags and office dogs!

It’s easy to forget the real purpose of a business when it’s so well hidden.

It’s a short and sweet read, but feels a bit dated. That might not come as a surprise since Fire In The Belly was first published in 1991. The time of “It’s the cost of the toys that separate the men from the boys” mindset among men seems to have past. But I think some of the alienation around masculinity is still around! It would be interesting to read a more recent book in the topic.

One thought on “Review: Fire In the Belly: On Being A Man by Sam Keen”